How to Use Hashtags Correctly: This Ain’t Your Grandma’s Pound Sign!

by That Helpful Chick | 0 comments

Ever wonder how to use #hashtags properly?

I know I did. I’d look at all the people posting on Twitter, Facebook and Instagram and just be confused at their use. Who decides what’s a #hashtag? Why do people use hashtags? I wanted to learn more about how to use hashtags correctly. I don’t know about you but I still call them pound signs and use it as an abbreviation for number!

So I’ve done a bit of reading and this is what I found….

How to Use Hashtags Correctly

Put simply – a hashtag is a keyword phrase. It is spelt out without spaces and a (#) in front.

They can be placed anywhere in your posts on social media: beginning, end, middle – wherever you want them.

Hashtags can be used to tie together any public conversations (post has to be public to be found in search). Searching for a hashtag can be done by either clicking on one, searching in a social media platform or using a 3rd party tool. 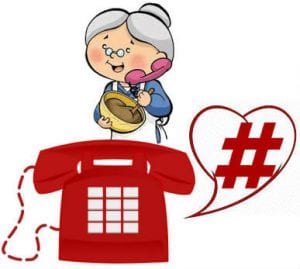 Why Should You Use Them?

Google’s Chris Messina says: “the “channel” concept of hashtags satisfies many of the things group discussions do, but without inheriting the “unnecessary management cruft” that most group systems suffer from.

They’re easily accessible with the syntax on Twitter (and now on other social media networks), easy to learn, flexible, and works with current user behavior instead of forcing anyone to learn anything radically new. It also works consistently on cell phones — whereas, for example, the star key doesn’t.”

Hashtags are just as relevant today (more so) as they were back in 2007 when they were a new concept. They make social posts more visible, increase engagement, update like-minded people and provide useful context for people to recall a topic.

How Are They Used?

Hashtags are often used to correlate popular conversations related to:

Ties conversations together – tweets talking about the same topic using a specific hashtag appear in the same stream.

There are a few ways to toggle the hashtag stream: Top (the default), Live, News, Photos, Videos, and More Options.

Top: A stream of tweets using that hashtag that has seen the most engagement — which usually means tweets from influential people or brands that have a lot of followers.

Live: A live stream of tweets from everyone tweeting out that hashtag.

News: A live stream of tweets from publishers and other designated news sources.

Photos: A collage of photos included in tweets that use the hashtag. When you hover your mouse over a photo, you can reply, retweet, or Like the tweet with just one click. You can open the tweet by clicking on the photo.

Videos: A stream of tweets using the hashtag that has videos in them.

More Options: A dropdown menu that has a few great options to pick from, including “From people you follow” and “Near you.” You can also save your search here by clicking “Save this search.” To access it later, click into the search box on the top right of your Twitter home screen and it’ll appear as a saved search.

On the left you can see related searches which can be helpful if you are looking for a hashtag for your own use and others.

On the right, Twitter will show recent and popular articles related to your hashtag.

Anyone who searches for the same hashtag will be able to find your tweet as long as your account is public.

You can also do an advanced search:

Search for tweets with specific words and phrases, written in a certain language, from certain accounts, near certain locations, published on certain dates, and even containing smiley 🙂 or frowny 🙁 faces. 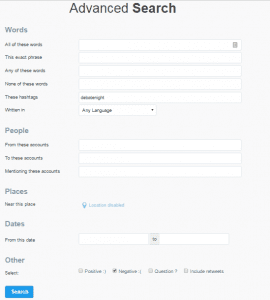 If you know the hashtag you are looking for, you can also just type it in your browser like this:

If you’re not sure what hashtag to look for, you can always look at the trending topics section. These are based on your location and who you follow. You can change this default option by clicking on change. 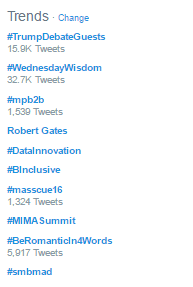 Live Q&A sessions organized around a hashtag. Buffer has a pretty good explanation (I hadn’t heard of them before!) “Imagine a business networking event — but without a dress code and with a keyboard instead of a bar. The same social customs apply — courtesy and respect — and it’s a great way to meet new people with similar interests.”

Reorder by date, hashtag, and topics like writing, social media, and so on. You can also submit your own Twitter chats.

Most people’s Facebook posts and accounts are private. This means that even if individuals are using hashtags, they aren’t searchable. The hashtags you can search for on Facebook tend to be published by influencers, brands, and publishers. 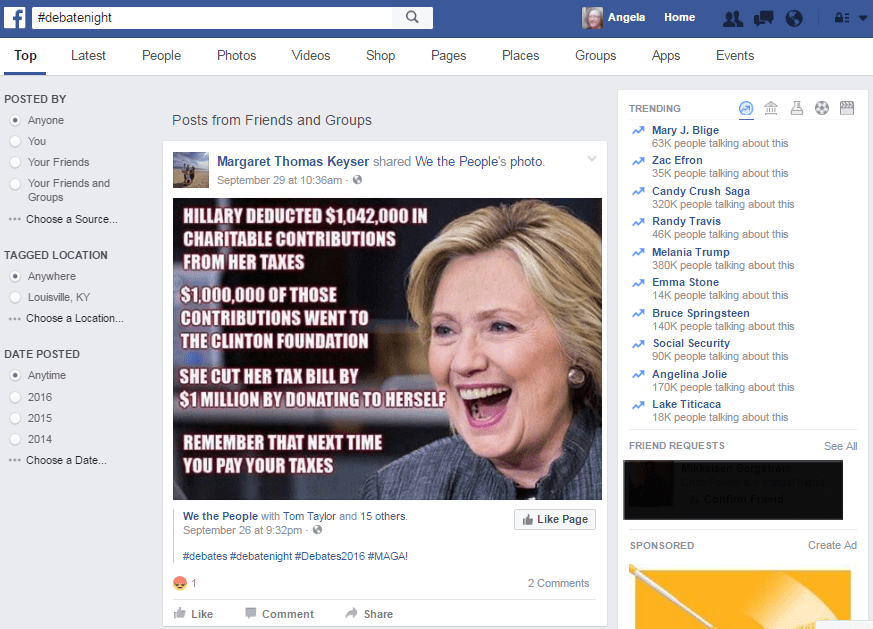 Top: A stream of Facebook posts using that hashtag that have seen the most engagement.

Latest: A stream of public Facebook posts using the hashtag.

People: People on Facebook with a name officially associated with the hashtag.

Photos: A stream of public Facebook posts using the hashtag that have photos in them.

Videos: A stream of public Facebook posts using the hashtag that have videos in them.

Shop: Places to shop that are using the hashtag.

Pages: Pages on Facebook that are officially associated with the hashtag.

Places: Places in the world with a name officially associated with the hashtag.

Groups: Groups with a name officially associated with the hashtag.

Apps: Facebook apps with a name officially associated with the hashtag.

Events: Facebook events with a name officially associated with the hashtag. 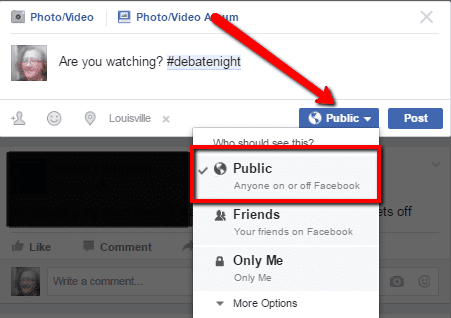 Once published, the hashtag is a clickable link.

Use the FB search bar or type directly into your browser: facebook.com/hashtag/debatenight 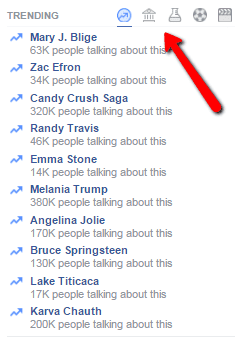 Unlike Twitter, trending topic in FB are not always hashtags.

But you can toggle between Top Trends, Politics, Science and Technology, Sports and Entertainment.

An Instagram hashtag ties the conversations of different users into one stream. If Instagram users who aren’t otherwise connected talk about the same topic using the same hashtag, their posts will appear in the same stream. 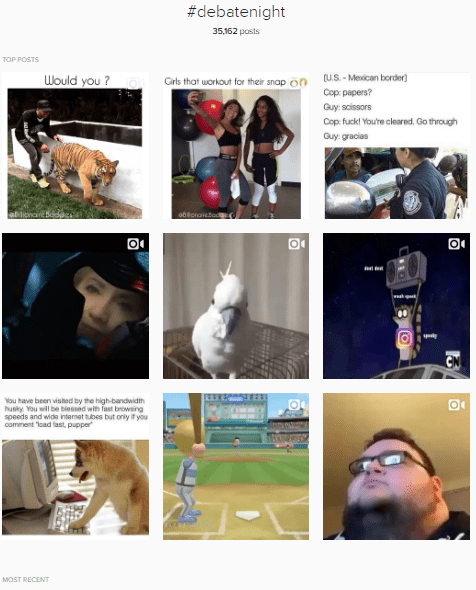 A lot different than FB and Twitter. Only three things you can do from this page: Scroll through related hashtags, look at the Top Posts, and browse Recent Posts.

Related Hashtags: All related hashtags which you can scroll through sideways (on your phone).

Top Posts: The nine posts using that hashtag that have seen the most engagement — which usually means tweets from influential people or brands that have a lot of followers. This is limited to nine posts.

Recent Posts: A live stream of Instagram posts from everyone posting that hashtag. 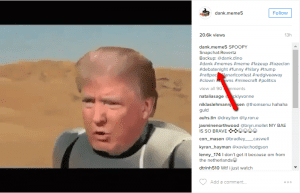 When posting in IG, you can start to type a hashtag and you will see suggestions based on popularity. 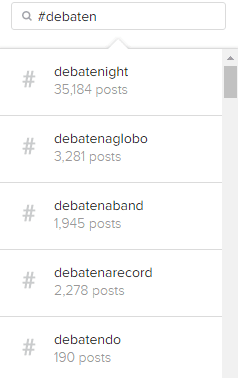 If you’re searching for popular hashtags, the best place to look is in Instagram’s “Explore” tab. Here, you’ll find popular hashtags as well as posts liked by people whose posts you’ve Liked, or posts that are liked by a large number of people in the Instagram community.

To explore these hashtags, go to the “Explore” tab by clicking that magnifying glass at the bottom of your screen. 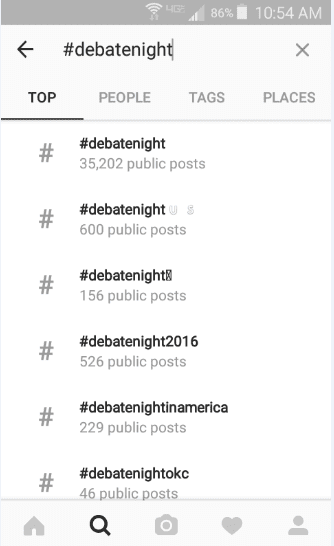 You can also use hashtags in person by placing on posters, stickers, business cards, flyers, etc.

They are easy to remember and easy for people to search for on their phones while out. 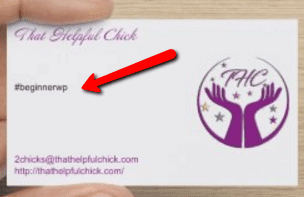 (Not our actual business card, just something I threw together for this post)

I hope you learned something new – I know I did!

Do you have any additional tips and tricks for using #hashtags? Leave them in the comments below!